A Book Review by Kendyl Bryant 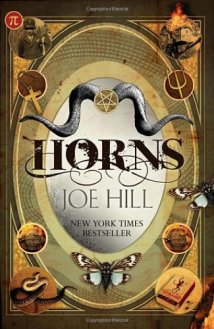 In preparation for the new film starring Daniel Radcliffe and to properly get into the Halloween mood, this month I read Horns by Joe Hill. I’m not into outright horror and thankfully Radcliffe has a habit of choosing the kind of scary films based on books that I do enjoy (e.g. The Woman in Black by Susan Hill). Horns is actually less of a horror novel, and more of a dark fantasy. A really, really dark fantasy. To the point where I had trouble getting through some parts, but also frustratingly needed to keep going so I could find out what was going on.

Horns begins with Ig Parrish waking up from a drunken night he can’t remember to find a pair of horns sprouting from his skull. After a visit to the doctor’s office and a few very off-putting conversations with the staff and patients, he discovers that the horns have imbued him with the power to make people admit to and act on their worst impulses, as well as the ability to see the awful things they have done in the past just by touching them.

But acquiring these powers is really just the tip of the iceberg in Ig’s story, which is told in the present through his own flashbacks and those of the family and friends that he comes in contact with. The reader soon finds out that Ig’s life has severely gone down hill since the love of his life Marrin Williams, was raped and murdered in their home town and everyone assumed it was him. But perhaps his new powers can set the record straight.

Like I said, it is dark. At one point the story is told through the eyes of the person who raped and murdered Marrin, which is a mind that makes me a little disgusted to be in. But ultimately, I think the payoff is worth it. Hearing first hand about sick things from sick people adds a new dimension to an already layered story. Strangely, this layer contains my favorite theme in the book, though I can’t tell you what that is or we’d be getting into some major spoilers. You’ll just have to trust me.

Another big theme running through this novel is religion, and this can get tricky. Ig has quite a few reasons to be angry with God, and when he essentially becomes a demon and is given the power to find the truth, the result is a decidedly anti-Christianity stance. If that is going to make you uncomfortable, this is not the book for you. But I would also add that it is not necessary to agree with the novel’s stance to enjoy the plot.

I, for example, thoroughly enjoyed Horns despite its disturbing topic. As I said, the novel is told in flashbacks and varying points-of-view, which give the reader just a little more information at a time, enough to keep them eager for more of the mystery and aware that each narrator has perceived events and people in a slightly different way. And while never openly funny, Ig has a dry, morose humor that seems to come out in the more dire of circumstances when the reader (and Ig himself) seem in the most need of an internal chuckle.

What I personally find most important is that the novel has made me eager to talk about its intricacies with someone else who has read it… but I don’t know anyone who has. I believe that’s where you come in. If a dark fantasy/mystery about a man who gains the powers of the devil and uses them to avenge his girlfriend’s murder sounds like a good read for the rest of your October, Horns by Joe Hill should be the next thing you pick up.

You can find Kendyl on Twitter and Tumblr as well as at AdaptationPodcast.com.

Working as an audiobook proofer at Brilliance Audio, Kendyl has an inexplicable love for young adult fiction (but not for love triangles), 80s music, TV and movies (John Hughes is perfection) and various fandoms, including but not limited to Harry Potter (Slytherin for life!), Doctor Who (even after Moffat ruined it), Nerdfighteria and anything by Joss Whedon. You can follow her on Tumblr where she is an active fangirl and proud feminist/social justice warrior or on Twitter where she basically just retweets the Adaptation Twitter… Your call. View all posts by Kendyl Bryant

River Ram Press: A Publishing Boutique with a focus on Young Adult and New Adult Literature