The True Meaning of Smekday by Adam Rex

A book review by Kendyl Bryant 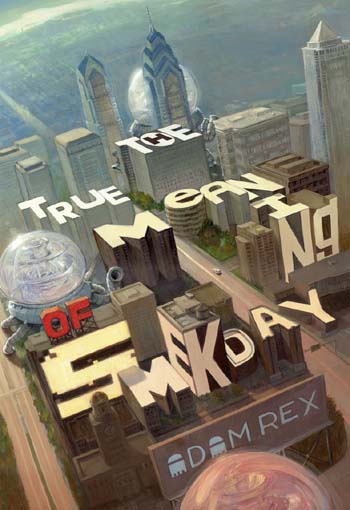 If you’ve seen the new Dreamworks film Home starring the vocal stylings of Jim Parsons and Rihanna, you might be surprised to learn that it was adapted from a 420-page children’s novel. While the movie is highly entertaining, heartfelt and accessible to all ages, as you might imagine it simplifies the story and loses some fantastic thematics in the process.

The True Meaning of Smekday by Adam Rex is written in essay form by the main character, Gratuity Tucci, an eleven year old who had to grow up rather quickly due to her somewhat-flaky single mother…and her mother’s alien abduction which leaves her to make her own way to Florida. You see, when an alien race called the Boov invades, they first need humans to teach them English (humans like Gratuity’s mother) and next they use their new-found English skills to tell all humans to relocate to Florida because the rest of the country now belongs to the Boov.

Gratuity, being a resourceful and audacious preteen, decides to drive down to Florida accompanied by the family cat, Pig. But on her way a flat tire leaves her stranded in the path of J.Lo (he picked the human name himself), a Boov that is hiding out from the rest of his race after making a mistake that puts both the Boov and humans in danger of death by planet ingestion.

The best part of the novel, in my opinion, is none other that the main character, Gratuity. She’s incredibly intelligent and forthright, while still being very believable as an eleven-year-old. She’s not perfect and her situation has rightfully given her some strong emotions that tend to lash out throughout the novel, but it makes her character all the more honest. And to top it off, she’s hilarious! From her insight into the world, to the way she phrases her essay, to her creation of new food groups (salt, fizz, animal-shaped, and blue), she will keep even older readers laughing.

In addition to all the fun, the story also has a pretty obvious colonization motif, serving to point out the similarities between this race of space-aliens pushing humans off their lands and empires of history that have done the same. It’s simple enough to be digestible for the kids reading, but gut-wrenching enough to stick in adult readers minds, driven home by some adult characters that don’t quite get the poetic justice.

It was an incredibly entertaining journey to step into Gratuity’s mind and her post-invasion world. I would recommend this book for anyone from ten years old to one hundred that is looking for a fun road-trip tale with an uncommonly, unlikely trio (can’t forget Pig!). Trust me, if you’ve only seen the film, you’ve only gotten a quarter of the real story. If you want to know the history of the Boovish race, what happened to the Loch Ness monster, the secret weakness of the Gorg or the true meaning of Smekday, you better get reading!

For more discussion on The True Meaning of Smekday, check out Adaptation Podcast where Kendyl and the other Adaptation hosts recently covered the novel. Beware of spoilers!

Working as an audiobook proofer at Brilliance Audio, Kendyl has an inexplicable love for young adult fiction (but not for love triangles), 80s music, TV and movies (John Hughes is perfection) and various fandoms, including but not limited to Harry Potter (Slytherin for life!), Doctor Who (even after Moffat ruined it), Nerdfighteria and anything by Joss Whedon. You can follow her on Tumblr where she is an active fangirl and proud feminist/social justice warrior or on Twitter where she basically just retweets the Adaptation Twitter… Your call. View all posts by Kendyl Bryant

River Ram Press: A Publishing Boutique with a focus on Young Adult and New Adult Literature